Today, Sweden and Finland submitted their applications for NATO membership…

If approved, the move will fundamentally transform the security landscape … of Europe and the World.

This provocative move, could potentially result in an enlargement of the North Atlantic Treaty Organization that was founded by my Grandfather Sir Winston Churchill — or it might just expand the simmering Conflict in Ukraine and spread the War further North and West.

“The risk of global nuclear war has practically disappeared,” Mikhail Gorbachev, the last leader of the Soviet Union, said in his 1991 Nobel Prize acceptance speech, even though Russia and the United States retained their massive nuclear arsenals.

Three decades later, nine countries are members of the nuclear club. Even so, many were reassured last summer when Russian President Vladimir Putin and US President Joe Biden during a Geneva summit reiterated the Gorbachev-Regan statement that “a nuclear war cannot be won and must never be fought.”

But ever since Russia’s late-February invasion of Ukraine, political leaders, nuclear arms control experts, and world citizens have tried to answer some version of the question: Will Putin use nuclear weapons in his war in Ukraine?

Of course as pundits harp away that the admission of Sweden and Finland into NATO will give the North Atlantic Treaty Organization a fairly strong entry into the Arctic and the Baltic sea — I know for a fact that this expansionary move will surely give us nothing more than a very fractured alliance.

And that is not an edge against Russian Federation, but rather a preamble and a push for Russia to create a new “Warsaw pact” now that they see this expansion and the consequent fracturing of NATO, as a victory of their own making.

Those savvy Russians play chess like nobody’s business, whereas the gray heads of Pentagon and Washington DC, alongside the “eminences grises” of Brussels, only know how to play gin-rummy.

And that makes the bureaucracy of the West that came up with this ploy — a failing proposition, because this time the pact will backfire like the double headed eagle will swoop and strike, as the force centered in both the Kremlin and in Beijing’s modern forbidden city shifts into a war time alliance.

So, methinks that maybe we need to sharpen our pencils and rethink the Modus Operandi of this NATO alliance today, instead of rushing pell mell towards a bloody nuclear conflagration, because that would be the final Armageddon for the human species that we are all trying our hardest to escape. 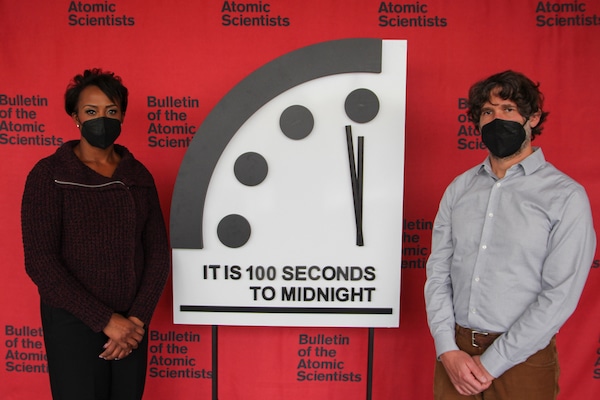 In January 2022 the Science and Security Board of the Bulletin of the Atomic Scientists set the Doomsday Clock at 100 seconds to midnight. At that time, they called out Ukraine as a potential flashpoint in an increasingly tense international security landscape. For many years, the nuclear scientists and others have warned that the most likely way nuclear weapons might be used is through an unwanted or unintended escalation from a conventional conflict. Russia’s invasion of Ukraine has brought this nightmare scenario to life, with Russian President Vladimir Putin threatening to elevate nuclear alert levels and even allow first use of nuclear weapons if NATO steps in to help Ukraine. The Doomsday clock has been changed and now we can see what 100 seconds to midnight looks like…

In their statement — the members of the Science and Security Board condemn the illegal and dangerous invasion of Ukraine by Russia. They call on all countries to denounce Russia’s actions and Putin’s outrageous threats of nuclear use, and for Russia to withdraw its forces and live up to its 1994 pledge — made as part of the successful process of ensuring Ukraine did not gain control over the 1,900 nuclear weapons left on its territory when the Soviet Union dissolved — to fully respect Ukraine’s territorial integrity. Anything less is an affront to the rule of law and the principle of national self-determination. Anything less risks global catastrophe.

The Nuclear Science and Security Board members bring their expertise to bear on aspects of Russia’s invasion of Ukraine that they find especially concerning as their goal in these fraught times, is to minimize the threat of global apocalypse in the short run, and then make it ever less likely to occur over time.

Yet now we are finding ourselves to be like those funambulists walking the tight rope above the heads of the Circus crowds — without a net bellow us.

Fun times up ahead.

So, as the clouds of another World War ushered in by ThermoNuclear weapons engagements — are drawing nearer than ever before — we are all poised to play games of brinkmanship without regard to the potential disasters unfolding in front of us.

Keep in mind that the Doomsday clock is right next to midnight again, at doom’s doorstep, with 100 seconds to go till midnight. The Doomsday clock was founded in 1945 by Albert Einstein and the University of Chicago scientists who helped develop the first atomic weapons in the Manhattan Project, with the members of the “Bulletin of the Atomic Scientists” — who all together created the Doomsday Clock two years later, using the imagery of apocalypse (midnight) and the contemporary idiom of nuclear explosion (countdown to zero) to convey threats to humanity and the planet. The Doomsday Clock is set by the Bulletin’s Science and Security Board in consultation with its Board of Sponsors, which includes 11 Nobel laureates.

Today, the Clock has become a universally recognized indicator of the world’s vulnerability to catastrophe from nuclear weapons…